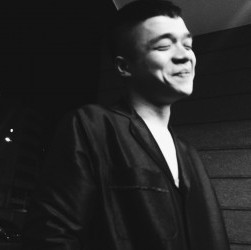 After graduating with a university degree in Fine Arts in the UK, Bill Nguyễn returned home, re-entering the city through multiple trajectories in the arts community: engaging as an artist, curator, educator, and writer of incisive reviews of contemporary art. Between 2009 and 2011, he designed workshops for Hà Nội DOCLAB – Centre for Experimental Video and Documentary Filmmaking. In 2012, he co-led the interdisciplinary education program ARTLAB focusing on cross-pollinating art and other creative fields for undergraduates and young artists. In the same year he co-founded and became the curator of Manzi. Manzi is a not-for-profit hybrid space, hosting visual art exhibitions, music concerts, video screenings and discussions on past and on-going issues relating to Vietnamese history, society and politics. Since 2013 Bill has been collaborating with Nhà Sàn Collective in Hà Nội as a freelance curator.

Bill currently co-runs The Anti-Gallery Gallery – a mobile motorised tricycle that acts as a space for exhibitions and discussions, transporting art works and ideas everywhere and anywhere. He is an alumnus of the 8th Berlin Biennial Young Curators Workshop and is currently a participating curator at the CuratorsLAB initiated by the Goethe Institut South East Asia.