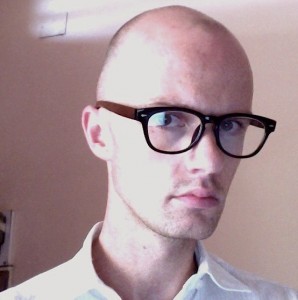 Roger Nelson is an art historian and independent curator based in Phnom Penh, and a PhD candidate at the University of Melbourne researching modernity and contemporaneity in “Cambodian arts” from 1955-2015.

He has contributed essays to scholarly journals including Contemporaneity: Historical Presence in Visual Culture, Stedelijk Studies, and Udaya: Journal of Khmer Studies; specialist art magazines including ArtAsiaPacific; as well as books and numerous exhibition catalogues. He has curated exhibitions and other projects in Australia, Cambodia, Singapore, Thailand and Việt Nam, and is a nominator for numerous awards and residencies. Roger has collaborated with Nguyễn Thị Thanh Mai on several projects, including presenting Day by Day as a solo exhibition at Sao La in the Hồ Chí Minh Fine Arts Museum, and at Sa Sa Bassac in Phnom Penh, both in 2015. In 2015-16 Roger was a participating scholar in the Power Institute’s Ambitious Alignments: New Histories of Southeast Asian Art research program, funded through the Getty Foundation’s Connecting Art Histories initiative. He has taught in the department of Art History and Asian Studies at the University of Melbourne, and spoken at conferences internationally, including in 2013 at New York’s Museum of Modern Art. Roger is a co-founding co-editor of SOUTHEAST OF NOW: Directions in Contemporary and Modern Art, a scholarly journal to be published by NUS Press, Singapore.